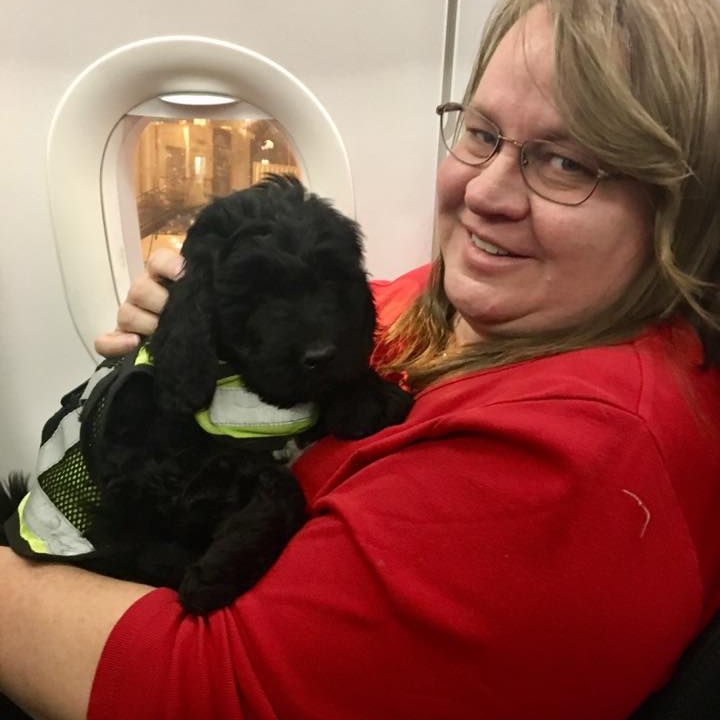 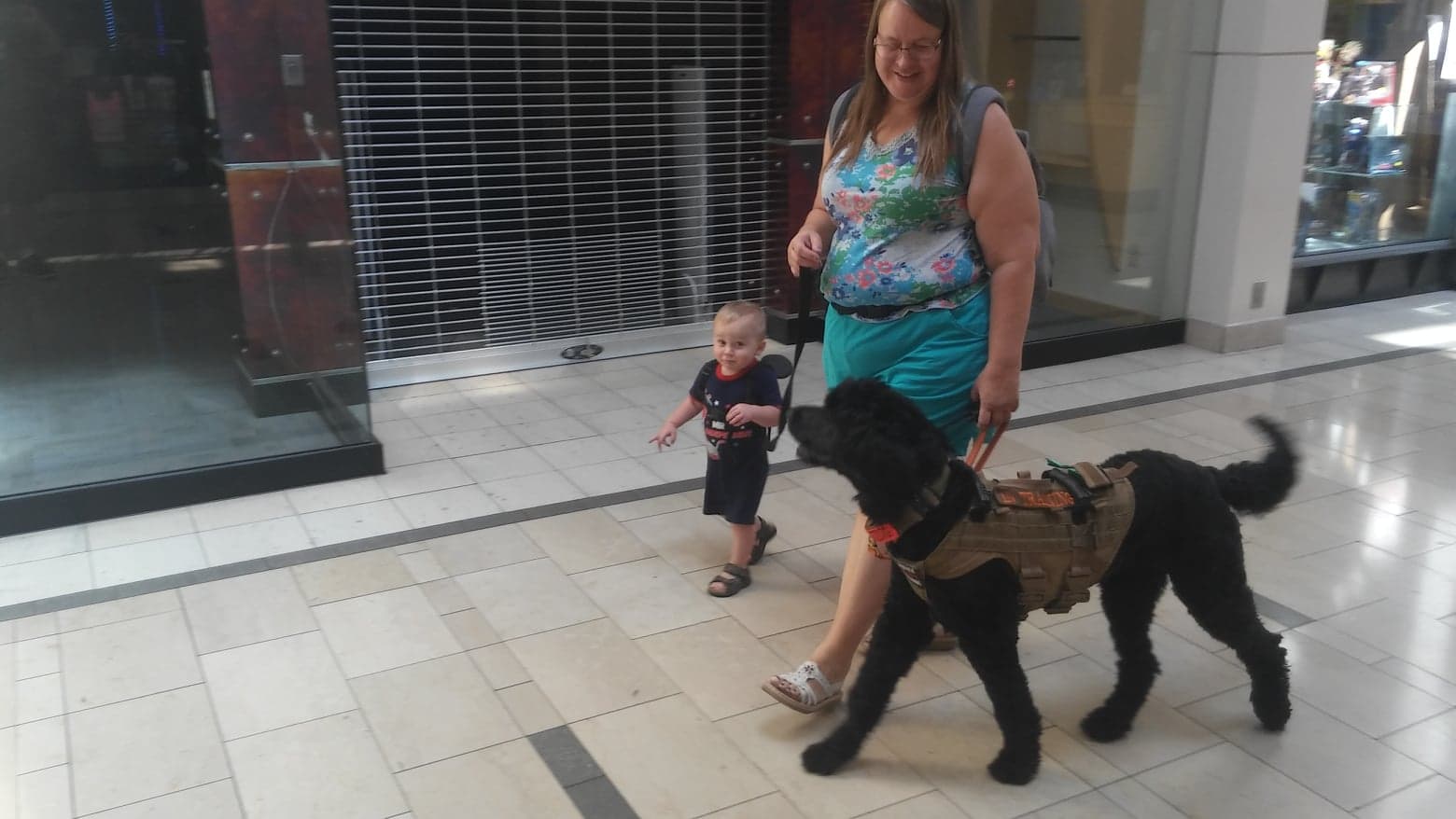 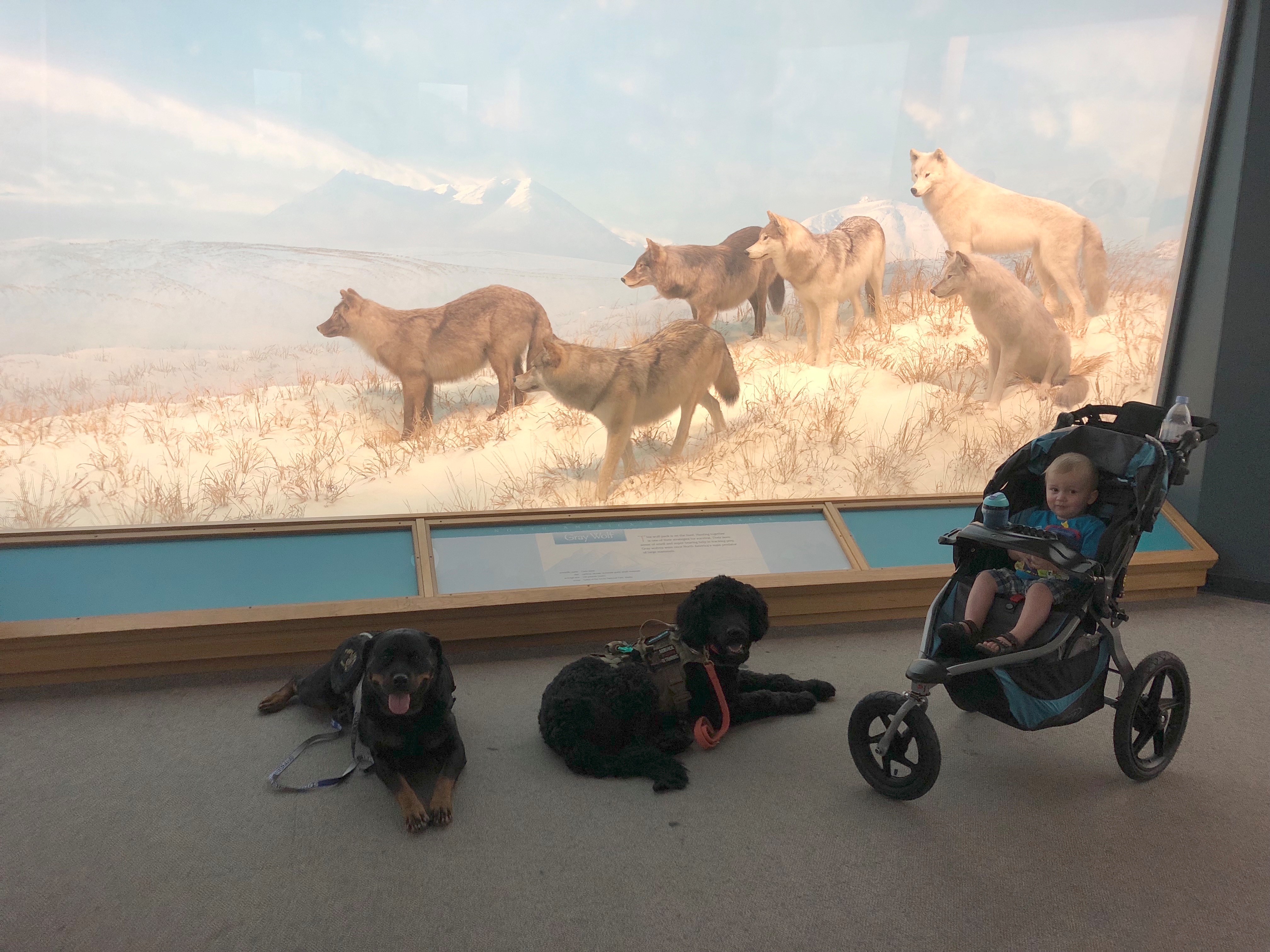 My name is Holly and I have had a service animal for 10 years. I worked in retail selling Sleep Number beds in Washington State. I was out going and training for a 120-mile bike ride for Lymphoma, when I was injured. I was running an errand for work across the street at Target when I fell down a flight of stairs in the parking garage. My life changed from that point on.

I blew my S1 through L5 discs in my back. I had surgery to fix the problem but the tissue around my spinal sack was so thin the surgeon had trouble sealing the area. He put a glue patch on hoping it would solve my problem. During my recover my back started leaking fluid between the stitches. The Physician’s Assistant at the time said not to worry about it. Within a couple of days my husband could not wake me up. He called my Dr. and he said I had a spinal fluid leak at to get me to the hospital right away! I had 2 more surgeries performed. I was lucky to be alive! I didn’t know if I was going to walk again! I have nerve damage in both my legs and balance issues as a result of the spinal fluid leak.

My husband traveled nationwide almost every week, since we weren’t sure if I would walk again, we decided to move halfway through the U.S. so he could be home more often, we chose Tennessee. When I looked into a service animal it was going to take seven years to get one. What was I going to do? My daughter’s cocker spaniel had puppies so we started to train one of her pups to retrieve items for me. We named her Daisy! I slowly worked up to taking items to my husband and going to get him. My husband had the opportunity to work from home and be home with us full time, but; this would have us move to Maryland. Since there wasn’t a service animal program in my area I hired a trainer to help me polish Daisy’s training for her capabilities. Daisy was very helpful and people who met her loved her.

My husband didn’t want a big dog so when Daisy had puppies we decided to train one of them as well. He was twice the size as Daisy and he loved the work. His name was Littlefoot. During this time we moved again to Arizona where we would be close to my family. There was a service dog program about 2 hours from us that we enrolled Littlefoot in. He was doing well until one day he caught Valley Fever. He was 10 mo. Old at the time. He no longer had enough good days, so we hired a trainer that came to us instead. Unfortunately, Littlefoot died at age 3 of Valley Fever. Our family was devastated!

We moved to Colorado last March for a new job for my husband. I kept telling him as great as Daisy is there was many times she was too small to help me. My husband would have to come home from work just to help me or we would have to wait for his day off so he could help me with the shopping. To my surprise, he started looking at larger dogs. He came across a large breed called a Newfypoo. I have severe allergies so my husband didn’t want any dog. We found a breeder in Ohio and I flew out to test her puppies. I didn’t want a black one because it would remind me of Daisy’s pup we lost. I guess God had other plans for me. I ended up with a black pup that reminded me of Littlefoot! Of course I named him Littlefoot II! He has a similar personality and every so often just gives me a nice memory of our lost Littlefoot. He is going to be quite larger and he will have his own personality. My husband took to him right away! Now it was time to start training him. 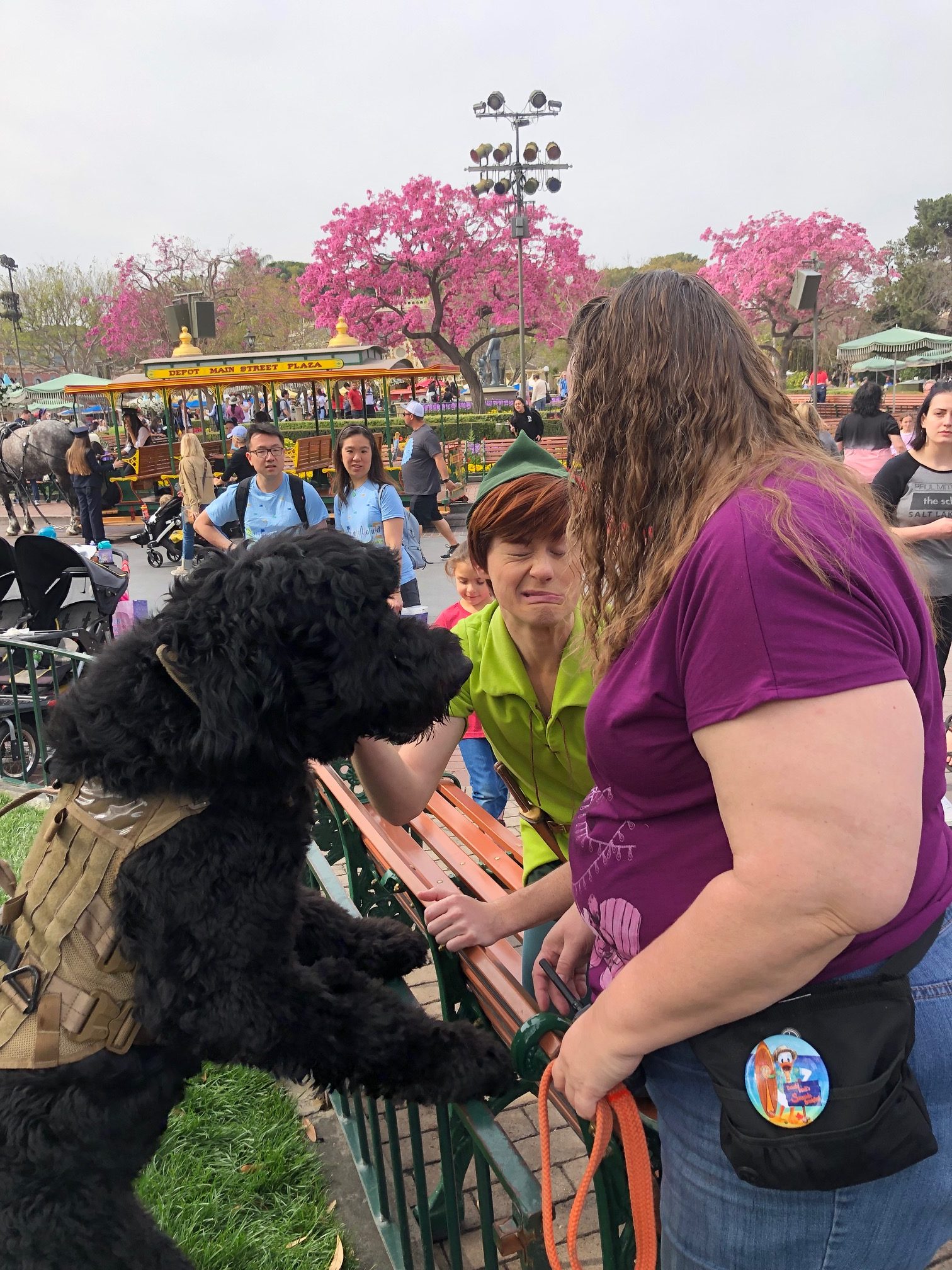 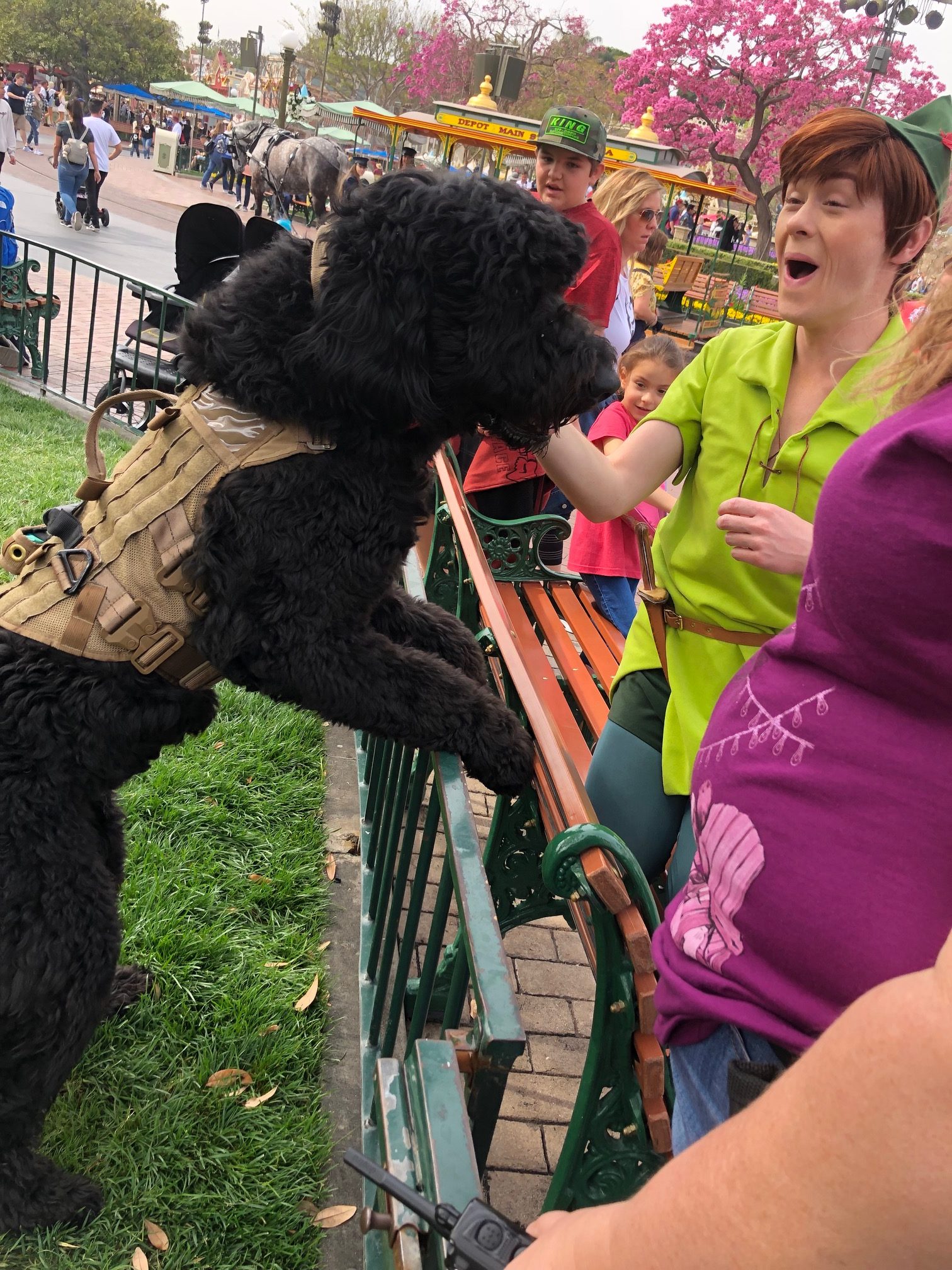 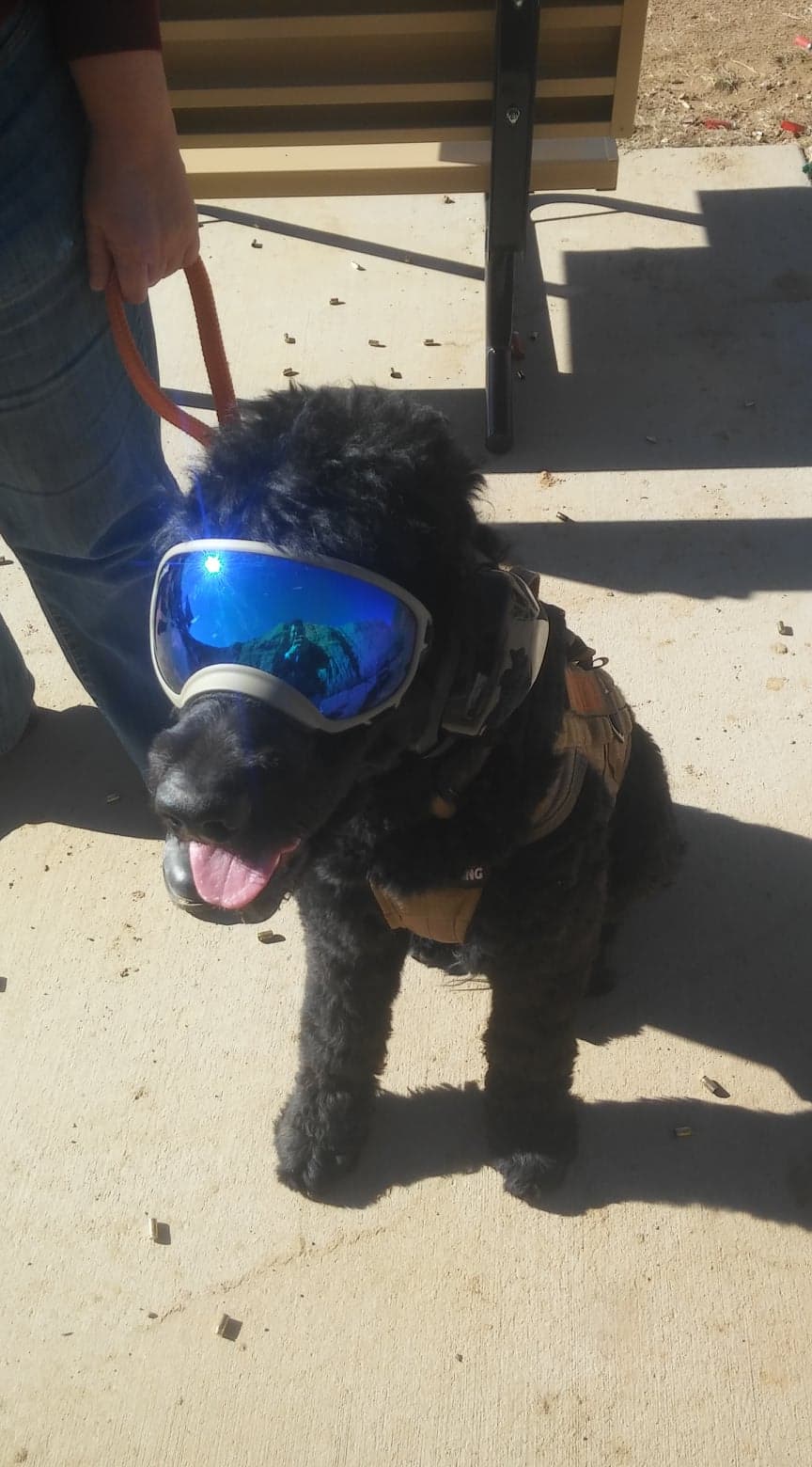 I selected David at Guardian Service dogs as our trainer. I really wanted a service dog trainer that specializes in service dogs! Even though our other trainers taught my previous dogs many things, a person that specializes in service dogs knows things your dog should learn that you might not even think of asking a regular trainer to teach you. Littlefoot II is doing well in training, he finished Introduction to Training class in 4 weeks! He has David impressed!

Recently Daisy became very lethargic so I had to rush her to the vet. We found out she had cancer. She was rushed into emergency surgery where the doctor found out the cancer had eaten her kidney and had attached itself to other tissue. He didn’t feel he would get all the cancer and also felt Daisy wouldn’t survive. She died during surgery and was only 7. Littlefoot II has also been sad but is doing better now. We will help each other through this like Daisy helped us through it when her son died.

We are so thankful to have a service dog program so close to us and can’t wait to see what David teaches our Littlefoot!