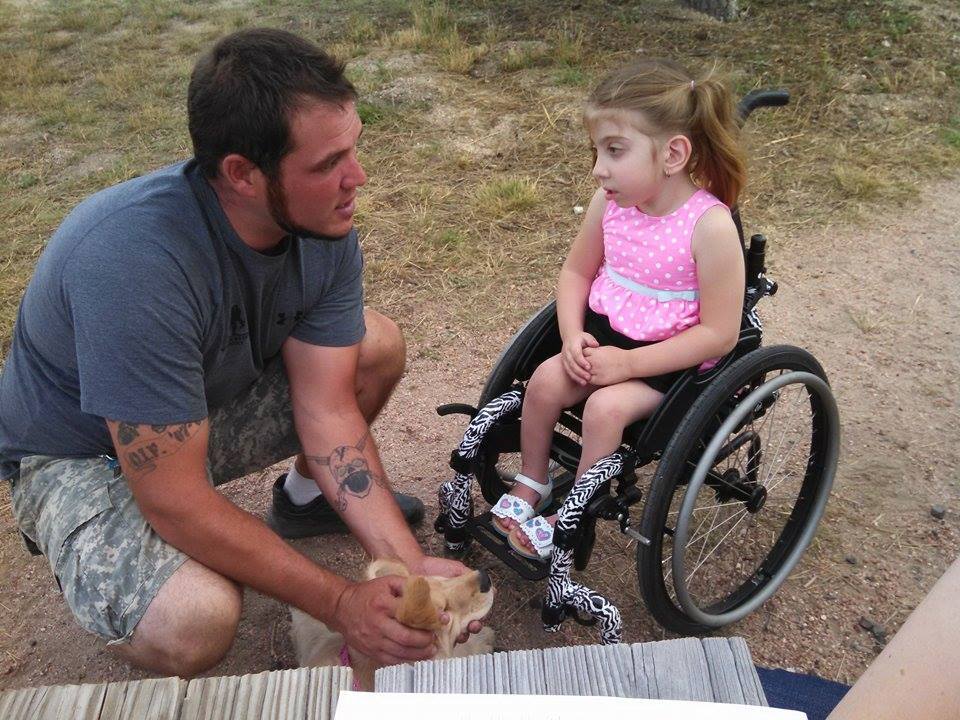 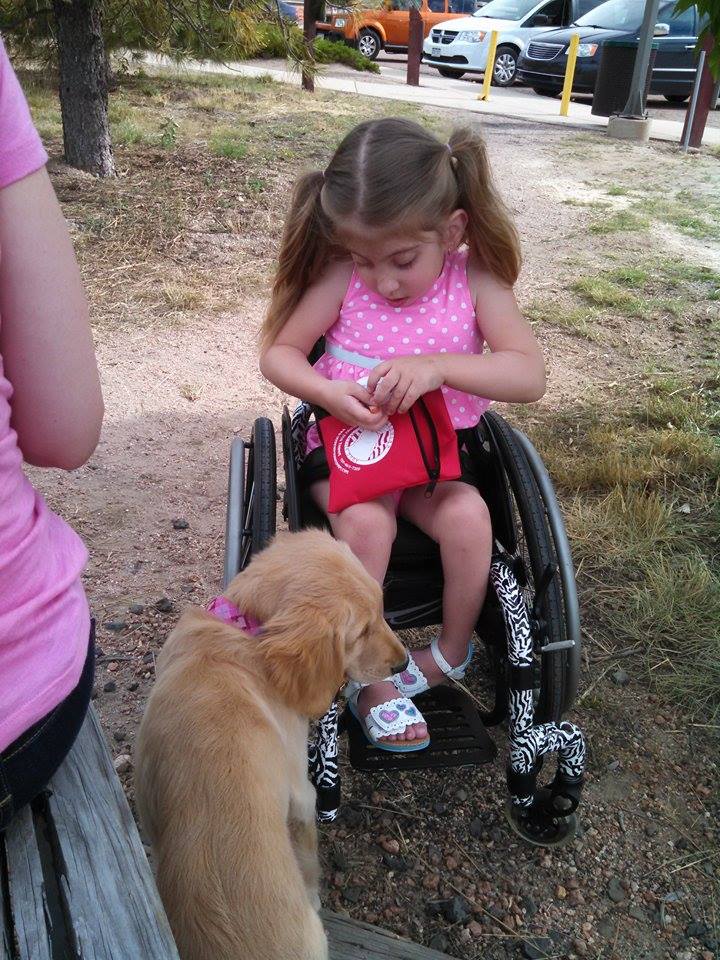 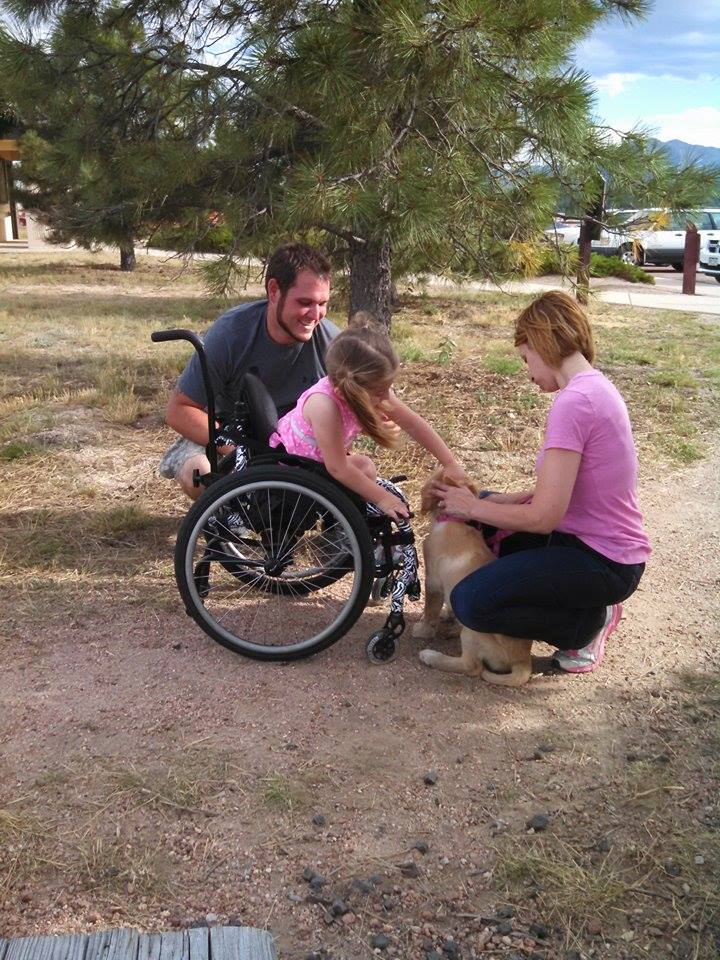 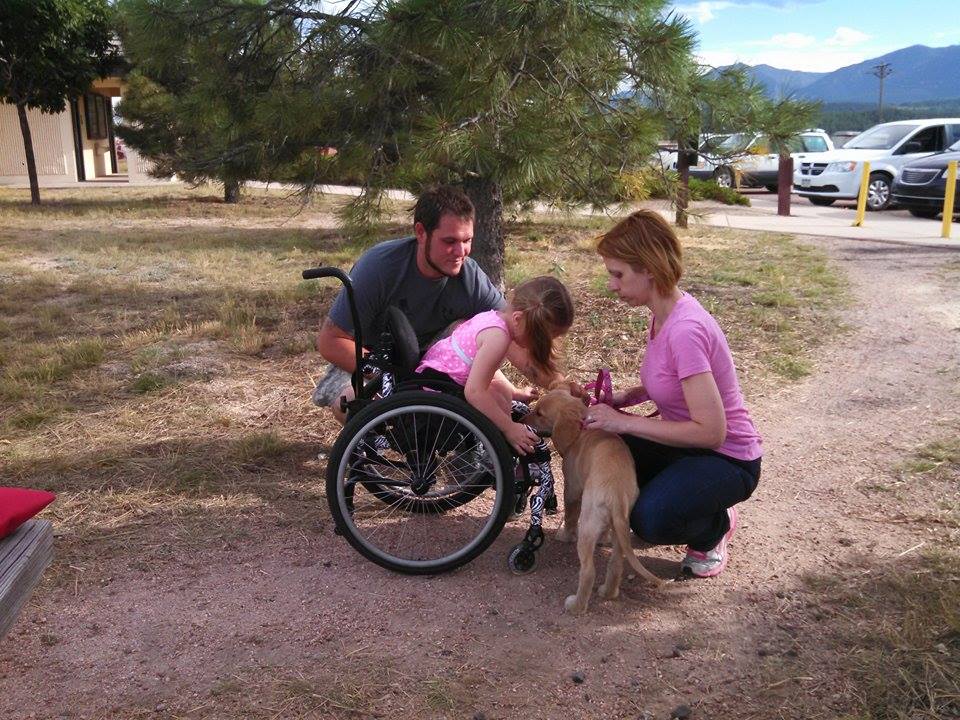 Faith is an absolute gem! It has been such a pleasure getting to know her and her family. We can’t wait to see what is in store. Faith and her family will endure many struggles throughout her life It is an honor to be able to help with some of those struggles with the Training of Sky as her Service Dog.

In late May 2010, Faith’s parents learned they were pregnant with their third child. This news came just a few months after Dad’s 9-month deployment to Iraq. From the moment the pregnancy was confirmed, Mom felt that something was different than her previous two, and pleaded with doctors to run tests because she felt something wasn’t right. In early August mom went in for her 20-week ultrasound, and she found out her concerns were warranted- they were informed their daughter had Myelomeningocele Spina Bifida, the worst form of Spina Bifida that causes paralysis and incontinence. They were stationed in Hawaii at the time and were informed that Mom was now considered a high-risk pregnancy and that upon delivery a pediatric neurosurgeon would have to be present to perform a back closure and shunt emplacement.

To their dismay, they found out that there were only 2 pediatric neurosurgeons on Oahu, but the fact their daughter was due early January 2011, neither of them said they would be in the area on her expected delivery date. Some doctors in Hawaii suggested that they simply terminate the pregnancy since they were a young couple, capable of having more children- but this was never an option for them. With God’s help and persistence, they were granted a compassionate reassignment to San Antonio, TX so Faith could be born in a region that had an abundance of medical care that could accommodate her condition.

“On 4 January 2011, we were blessed with the birth of our 3rd daughter. Initially, we had chosen other names for her, but after learning about her condition- my wife and I agreed to name her Faith Noelle. She was born via C Section and had a large bubble on her back. Also, the entire time in utero, she was unable to move her legs, so she came out twisted with her legs crossed in front of her. Later that afternoon, they took her down for what was supposed to be a 4-hour surgery. She was actually down in the OR almost 14 hours and had to spend the next 10 days in the NICU.

Faith is celebrating her 5th Birthday soon, but she has truly been a blessing and inspiration in our lives. Her legs barely move except for hip flexor movement, and she is unable to weight bear. However, she gets around by “Army Crawling” all over the house, climbing up on chairs, couches, and in and out of her wheelchair. She is very headstrong, determined, and has a smile that completely lights up the room. She is small for her age and has other sensory concerns that impact her ability to eat a normal diet, so she has been on toddler formula for almost 3 years now. She has multiple pieces of medical equipment to assist her, but our biggest problem is the fact she grows shortly after she is measured for braces, so she is not able to wear them very long.

Earlier this year we decided to get Faith a Golden Retriever puppy that she, as well did our entire family, fell in love with as we routinely visited a pet shop in our local mall. Faith decided to name her Sky after her favorite pup on one of her favorite shows, “Paw Patrol.” My wife and I immediately thought about getting a service dog for Faith to help her eat, retrieve dropped items, and assist with daily care so she could be more independent, like most children her age, and alert us if something were to happen and Faith needs help. A lot of our research proved that no one would give a Service Dog to a child Faith’s age as the child was not ready for the dog. The child had to be older and there were also long wait lists.

It is very heart breaking to see Faith interact with other children and have to answer tough questions about how she is ready to walk, and how come she cannot run and play on the playground. Faith’s determination, upbeat personality, and kindness have made such an impact on our family as well as others – we cannot picture life without her.

We are hoping Service Dog Training can be funded so we can try to provide Faith with the independence, confidence, and self awareness that most kids her age experience. Watching Faith and Sky interact is so touching, and we hope that Sky can be trained so they can grow even closer. We have been fortunate so far that Faith has only needed her initial surgeries after birth, and has yet to need revisions.. however, we understand that revisions are a part of her condition and that it is only a matter of time before she will need surgery on her back, shunt, and legs again. It is going to be very interesting watching Faith grow up with a puppy, and have a chance to have this dog assist Faith for the foreseeable future. 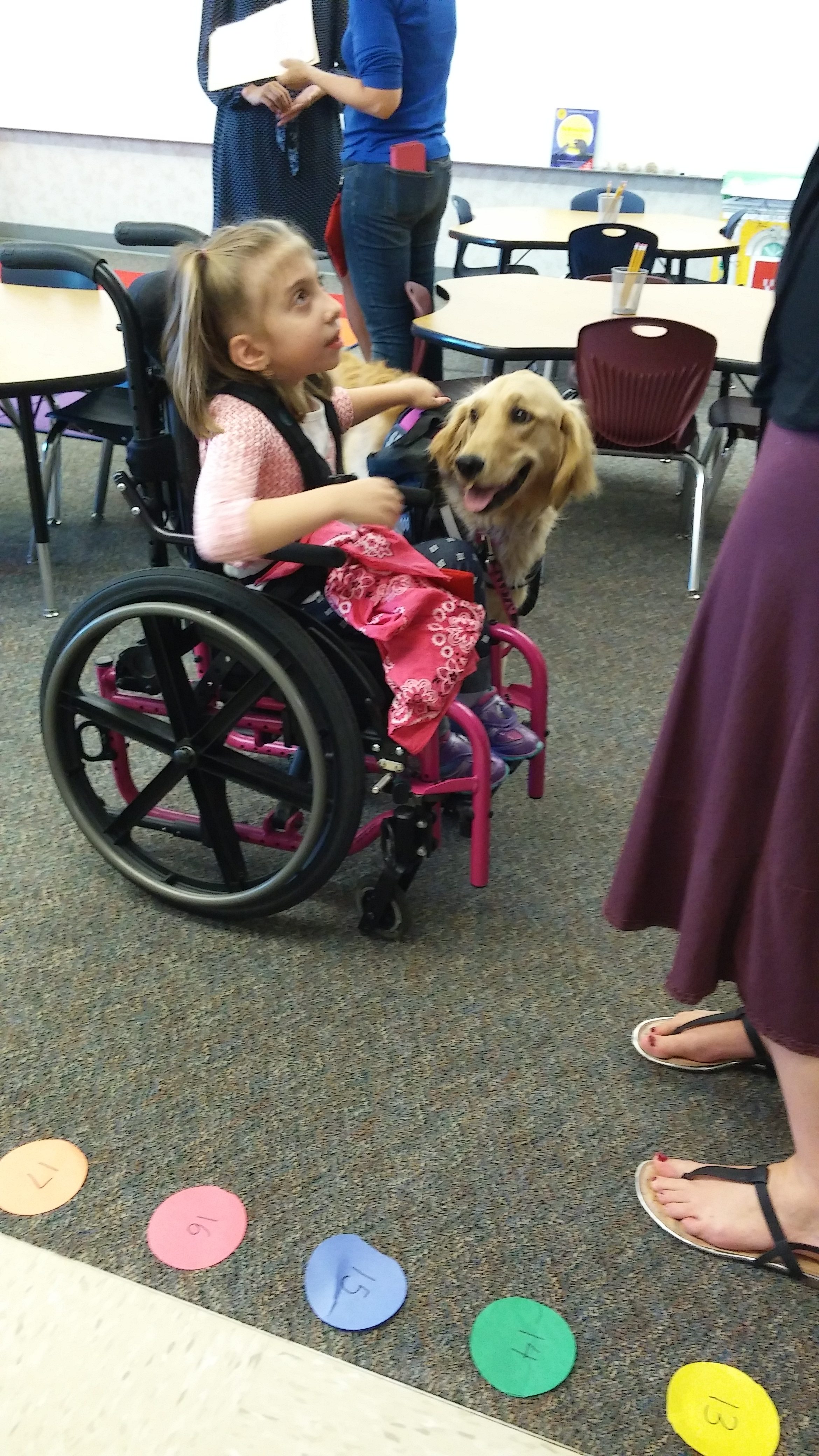